An Austrian kid goes on vacation to Egypt and is so enthusiastic about Arabic that the 14-year-old starts learning Arabic on his own back in Austria. That’s the story of Georg Binder. Learn more about him in episode 29 of the “9273 roots”-interview series.
byGerald Drißner
5 minute read
No comments

The man who taught himself Arabic as a 14-year-old kid
after a vacation in Egypt.

Georg started teaching himself Arabic (الفصحة) when he was 14 years old after a vacation in Egypt. This happened when the Internet had not yet been invented.

Georg grew up in a small town in Burgenland, Austria (النِّمْسا), close to the Hungarian border. The teenager started to look for Arabic-speaking residents, and, later, took lessons from a Palestinian woman who lived in the same town in Burgenland. Until today, Georg is passionate about Arabic.

Georg studied International Business Administration (IBWL) and Arabic Studies (Arabistik) as a second degree at the University of Vienna (Austria). He frequently travelled to Egypt and later worked in Cairo for a year and a half (2006/2007). In Cairo he learned the Egyptian dialect through friends.

Since 2013 Georg lives in Australia (أُسْتُرالِيا).

I grew up in a small country town in Burgenland, Austria. I have always been interested in foreign languages and learning about different cultures from very early on. After returning home from a dive trip to the Red Sea with my brother when I was 14 years old, I decided to try Arabic, and that’s where it all started for me.

Having moved to Vienna to complete my studies, I moved to Cairo and later moved to Sydney, Australia, where I work in the Technology risk sector.

My first Arabic grammar book was “Assimil – Arabisch ohne Mühe” which covered the basics of Arabic grammar. However, I quickly realised that I also had to pick up some conversational phrases and words if I wanted to chat with locals, so I also bought “Kauderwelsch – Ägyptisch-Arabisch Wort für Wort”.

Remark: The literal translation of the German phrase Arabisch ohne Mühe is quite funny. It means: Arabic with no effort. To be honest, I have no idea how this is supposed to work. Kauderwelsch is also an interesting German word. It basically means gibberish and is used to denote a confused way of speaking, an incomprehensible mixture of several languages or an incomprehensible foreign language. 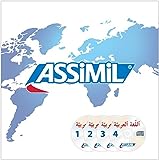 ABOUT THE BOOK: The Prophet is a book of 26 prose poetry fables written in English by the Lebanese-American poet and writer Khalil Gibran. It was published in 1923 and has been translated into over 100 different languages, making it one of the most translated books in history, as well as one of the best-selling books of all time.

Whats’s the story? The prophet, Al Mustafa, has lived in the city of Orphalese for 12 years and is about to board a ship which will carry him home. He is stopped by a group of people, with whom he discusses topics about life: love, marriage, children, giving, eating and drinking, work, joy and sorrow, houses, clothes, buying and selling, crime and punishment, laws, freedom, reason and passion, pain, self-knowledge, teaching, friendship, talking, time, good and evil, prayer, pleasure, beauty, religion, and death.

It depends on what you are trying to achieve and how you define “mastering” a language. If you want to be able to communicate and chat to locals while you are travelling, I think you can get there in a year if you stick to a formal learning program and through practice, practice, practice.

Mastering the Arabic language is probably a lifelong journey if you want to get every word and every grammatical aspect right every time you talk.

My goal has always been to “have a go” at speaking Arabic, knowing I would make mistakes. I would talk to friends and locals in Cairo, and I spoke formal Arabic at university during conversational classes with our Iraqi born teacher. She was very strict with grammar and pronunciation.

But as long as I could get the message across and people understood what I was trying to say, I was happy 😊

It is ازْدِواجيّة which in German can mean Doppelgleisigkeit and in English twofoldness, metaphorically also double standard.

Remark: The root ز-و-ج is tricky in certain forms. For example, if you use the pattern افتعل of a VIII-verb, some weird things happen. Instead of the standard ازتوج, the letter ت becomes softer and turns into a د. The same happens in ازْدِواجيّة which, by the way, is also used to express bilingualism/diglossia (ازْدِواجيّة لُغَويّة).

The word ضِفْدَع, which means frog.

I prefer the Egyptian dialect the most, followed by the Lebanese dialect.

It can mean teacher or just mate.

It is an Egyptian Arabic proverb: If your friend is as sweet as honey, do not lick up all of him. (Meaning: Don’t take advantage of your friends.)

The best thing that was ever said about the Arabic language was that the grammar rules are just like any other.

I don’t have one in particular.

I listen to anything from “Austropop” (i.e., music by Austria singers and songwriters) to Arabic pop and Mozart.

My greatest fear is running out of time.

Try everything at least once.

Georg Binder, thank you for your time.

Quiz: How well do you know the 99 names of Allah? 20 random questions

@ArabicForNerds
352 Following
2K Followers
20 questions for: Betül Aslan (#30) I've always met many excellent Arabic speakers in Turkey. Betül Aslan is one of… https://t.co/MpnEPFb59K
16 days ago
What are the best dictionaries for Arabic dialects? Dictionaries for Arabic Dialects are rare. Here is a list of to… https://t.co/7PHB9Lmu6Z
28 days ago
Quiz: How well do you know the 99 names of Allah? A quiz about the 99 names of Allah (أَسْمَاءُ ٱللّهِ ٱلْحُسْنَىٰ)… https://t.co/iXl6OdoMrx
34 days ago
Follow

"7 years for fluency plus a lifetime for mastery", that's the time needed to master Arabic, says Marco Rateitschak. Learn more about Marco in Episode 27 of the "9273 roots"-interview series: The man who traveled for 4 hours across mountains to attend Arabic classes.
Read More

Episode #10 of my series "9273 roots": 20 questions for the woman who writes books for bilingual kids (Arabic-English): Sirine Demarchkie
wpDiscuz